I saw a lot of movies this year. Eighty movies to be exact. There are still so many that were released this year that I’d love to catch over the holidays, which I’ve listed below as well (mostly for my own record keeping, can’t lie), but of the 80 I did see, there were some truly fantastic, instant classics, and some real surprises. As always, none of my lists are in any particular order. Here we go, movies from this year you should definitely take the time to watch:

Blackkklansman — Hands down the best movie I have seen all year. I’m unbelievably glad to see that I’m not alone in feeling this way: the film by Spike Lee still has a 95% Fresh Rating on Rotten Tomatoes. I feel as if The New Yorker’s Richard Brody said it best when he wrote of the film: “For all its revelations of racist rot at the core of American society, Lee also offers a clear, specific, and wondrous, if wary, view of change that’s possible because, at one 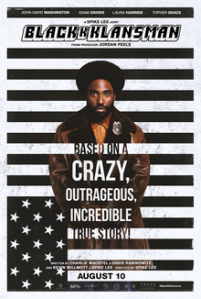 time and to some extent, it actually happened.”

My boyfriend and I went into the late-night showing (the one and only week it showed in our coastal South Carolina tourist town), knowing if we wanted to see it we had to do it right then and there. We thought – thanks to a brilliant marketing campaign – that we were in a really funny buddy-comedy type period piece based around a really heavy topic. I have always liked Lee as a director, I don’t think I’ve ever seen a movie of his I didn’t love, but I really love when he steps a little bit outside of his own self-serious worldview and he’s got great comedic timing as a director. We did indeed get a really funny buddy comedy of sorts, but the movie is so much more than that. It is shocking and scarring and thoughtful and romantic and incredibly smart and difficult and entertaining and forces you into a sense of introspection that for myself, at least, lasted weeks. The footage of the death of Heather Heyer, in particular, left me in silent tears as we left the theater.

Long story short – if you haven’t made the time to see this movie (or didn’t have the opportunity to while it was in theaters), go rent it tonight. Make the time. This is a movie we need today – the story may be based on true events of the early 1970s, but it is necessary for the climate in which we live in 2018.

— Black Panther was absolutely the best geek movie to come out in 2018. Honestly, other than Rogue One: A Star Wars Story, it’s the best geek movie to come out in many, many years. The script, the world building, the cast & the incredible acting, the visual direction, and even where it stands in the larger MCU pantheon… Everything was pitch perfect. Black Panther gave us a Marvel hero everyone can stand with and a villain that we didn’t necessarily disagree with. This movie made people question everything and ten months later I still think about its lessons and utter cinematic perfection. Also, I am still desperately waiting to see Chadwick Boseman in every role ever (especially a rom-com – come on Hollywood, help a girl out).

Avengers: Infinity War — WOW. Wow. Just… Wow. Did anyone else walk out of the theater on April 27th feeling like their brain had actually melted and oozed out of their ears? Because I’ve read the comics – I knew what was coming (for the most part) and yet I still felt like my brain had melted and oozed out of my ears. With so much material that the story “needed” to be split into two films, I truly felt that the Russo Brothers did a fantastic job deciding what needed to be included and what could safely be left out. So often, when decisions like this are made, fans come away wanting (hello, Harry Potter directors), but they balanced the desires of old fans and new in a wonderful way. I will never forgive them for the taken – unless they fix it in Avengers: Endgame, of course! – but it was an amazing film experience either way.

Solo: A Star Wars Story — I will die on this hill! All you angry Star Wars fanboys can keep stewing in your mothers’ basements for all I care because Solo was an utterly awesome movie. It was fun and funny and heartbreaking in its own way and I’m still, months later, glad I didn’t list to the disgruntled, noisy, whining little boys who told Star Wars fans to stay away. More individual Star Wars movies! More universe-expanding stories! Please! (Sidenote: Alden Ehrenreich is hot and charming and cheeky and was a perfect young Han and you can all shove any other opinion on him up your butt).

Crazy Rich Asians — Lastly, I had to include the best romantic-comedy I’ve seen in ages (Book Club was surely a runner-up for this year, for Crazy Rich Asians beats out nearly any chick flick I’ve seen in years). This is the first film by a major Hollywood studio to feature a majority Asian American cast in a modern setting since The Joy Luck Club (1993). It had been fifteen years. With all the hundreds of movies released every year in the US – how was it fifteen years between movies starring mostly people of Asian heritage?! That just seems insane to me!

Crazy Rich Asians is more than that, though – it’s hilarious and sad, and so incredibly romantic and it empowers it’s female characters and doesn’t tokenize its gay characters and it’s triumphant! Love wins! Sassiness matters! Kindness is a strength! Intelligence is admired! The costumes and set-pieces are outrageous and gorgeous. I can’t wait for the next two movies and have had the book series on my wishlist since I saw the movie. I love when a rom-com (hell, when ANY movie) makes me walk out feeling like I can concur anything in my life – love, work, family, drama… I can do it all. And the women in this movie do it all. They fall in love, they deal with awkwardness, and stand up for themselves, and walk away from people who don’t treat them with the respect and love and kindness that they deserve and that they exhibit themselves. It’s a movie about women, honestly, family matriarchs, young women, uncomfortable women, hurt women. Beautiful women, different women, rich women, middle-class women, nerd women. I love these women. And I love this movie. If you love women, you’ll love it, too.

Bohemian Rhapsody, A Star is Born, Jurassic World: Fallen Kingdom, Mission: Impossible – Fallout, Incredibles 2, Peter Rabbit, A Wrinkle in Time, Pacific Rim Uprising, The Last Movie Star, Won’t You Be My Neighbor?, The Miseducation of Cameron Post, Juliet, Naked, A Simple Favor, The Children Act, The Hate U Give, The Happy Prince, Can You Ever Forgive Me?, Nobody’s Fool, The Front Runner, Mary Poppins Returns, Bumblebee, Second Act, On the Basis of Sex, & Vice