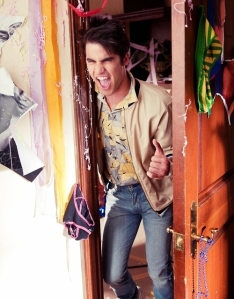 I’ve never really been a big fan of Glee (though I am grateful that the show’s first season brought Journey back to the masses, because the world always needs more Journey), but the show’s latest star to take a big turn has my interest. Darren Criss is a self-proclaimed musical theater dork, proud of his work as a straight man playing a gay role model, and got noticed for playing Harry Potter in A Very Potter Musical online. There are few dorks in this world who also pull of the GQ look as well as this man, and so, in honor of the rumor that he’s officially been promoted to a series regular on Glee, this week’s Tasty is Mr. Blaine Anderson himself. After the jump check out some of his most fun, most colorful, and larger than life photo shoots!